Failure Is My Friend 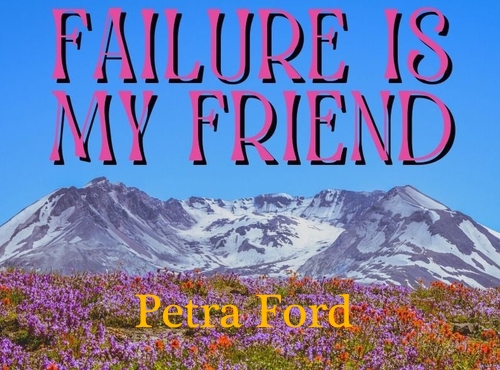 Failure is a word that has a bad bad bad rap. I mean the poor word really did get the short end of the stick. People just have it all wrong. They see failure as something bad. Failure means you’re not good enough, you didn’t try hard enough, people look down at you, you’re a loser. Failure evokes a host of negative feelings… depression, unworthiness, fear, anxiety, shame, disappointment, being less than, not measuring up, thinking that everyone else has achieved while I have not… I have “failed”. We obsess about how it makes us look in other people’s eyes. We define our self-worth by external accomplishments and when we don’t achieve them, once again we have failed. The truth of the matter is everybody’s got it all wrong. Failure is actually a good word…well no, it’s actually a great word! Who knows this? Anyone that’s ever succeeded at anything in life. I don’t know a single person that’s accomplished anything of note that didn’t fail along the way. And they didn’t just fail once or twice or three times, they failed over and over and over again. They literally failed countless times. The difference is they have a completely different definition of the word “failure”. They don’t look at failing as something bad. They know it’s an important learning opportunity. Just another step towards their ultimate goal. It’s inevitable. They know it’s part of getting there. There is no other way. If you are not “failing”, you are not striving to reach a meaningful goal. We know that “failure” provides us with valuable information. It shows us where we need to improve. It might show us that we need to adjust our compass. It sharpens our focus. It reinforces our determination to achieve our goal.
When I am faced with a “failure”, I actually get fired up! I know I’m pursuing something worthwhile. Because if it was easy, well it just wouldn’t be satisfying. My MOST satisfying accomplishments were the result of a multitude of failures. Failure after failure after failure ….. That made achieving the goal incredibly precious. I felt unbelievably proud. It was a journey rich with learning and lessons. A journey that made me a better person on many levels.
If we had a different relationship with the word failure, we’d be much more apt to try new things, to chase our dreams, to push ourselves outside our comfort zone. To do something that we really like or are interested in or want to do. But the biggest obstacle is that people fear failure. Often when people talk about a goal or dream, they immediately bring up all the things that could go wrong. And you know what, their right. Those things could go wrong. But that’s not bad. It just means that you’re on your way to something great, to something better, something that will give you an enormous amount of satisfaction. Failure means you are different than most people. You have the courage to step outside your comfort zone. You are striving for something that’s not easy to achieve. Something that’s incredibly important to you. Something that’ will teach you valuable lessons, bring you immense satisfaction and joy. Embracing failures as you journey towards a goal is a life well-lived.
Achieving challenging goals feels amazing. It’s why I keep striving for failure, embracing failure and pushing towards failure. Because I know that as long as I’m failing, I’m living a full life. I’m pushing myself toward something greater and better. I’m growing and learning and at the end of the journey, I’m going to feel so much better about myself. All you really need to do is redefine the word failure. Failure is NOT a bad word. No, failure is actually a GREAT word. Failure is the only way to get where you really want to go. To grow, chase your dreams, embrace your passion, and reach your goals. Failure is my friend. Make failure yours.
You must be logged in to post a comment.

“Wherever you are, you’re a single step away from a new beginning” – Oprah Winfrey
Sportsmanship
Musings on Drive and Arousal
If it ain’t broke, don’t fix it
Sticky Labels
One Small Act of Kindness
New Online Course – Heeling Clinic: Perfect Position
Opinions
Positive Attitude/Positive Performance Seminar – POSTPONED
When Life Gives You Lemons…Walk On The Beach
Do It For The Love Of It
An Interview With A Good Boy
Pigs And Dogs
Senior Dogs
Just Like Me